The Case of Beth Schlesinger – www.helpbeth.org

Beth’s Case in the News

Austrian Times – The Wisdom of Solomon And A Modern Tragedy

Daily Telegraph – Beth Schlesinger: ‘I still hope that a miracle will bring my boys home’ 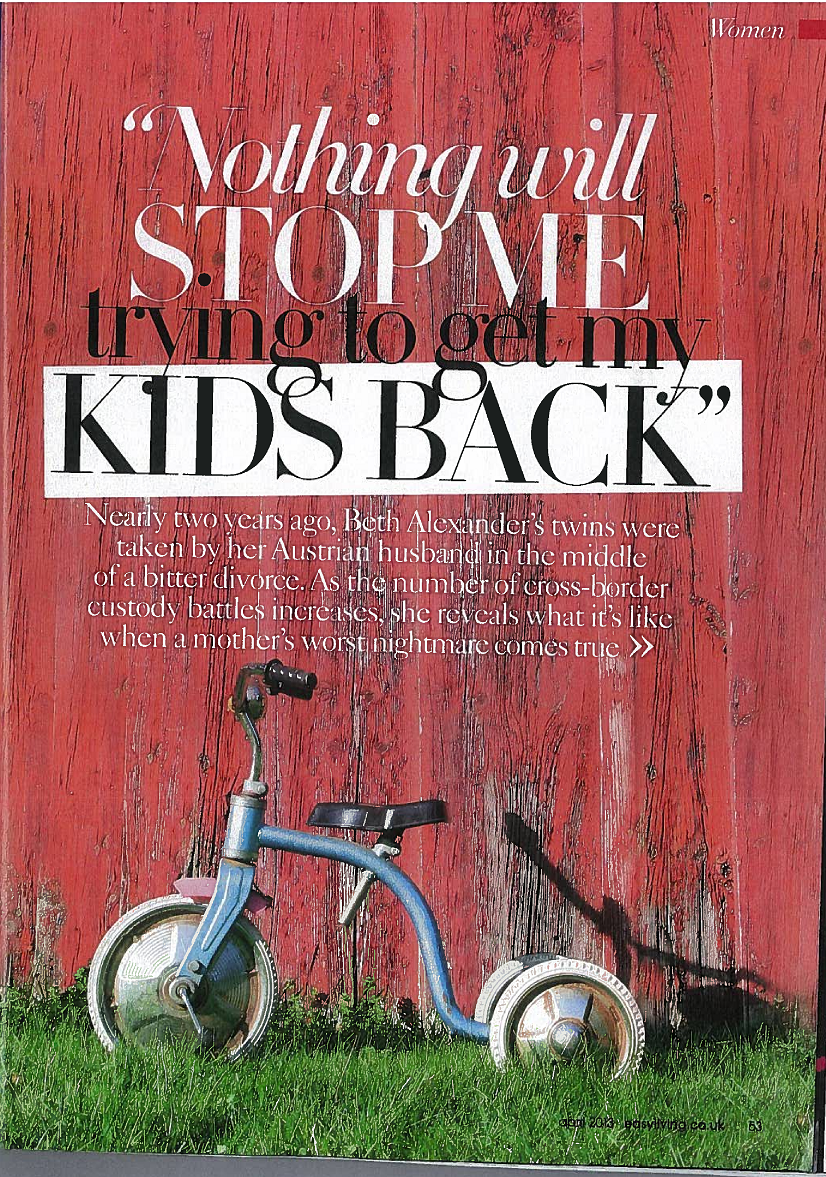 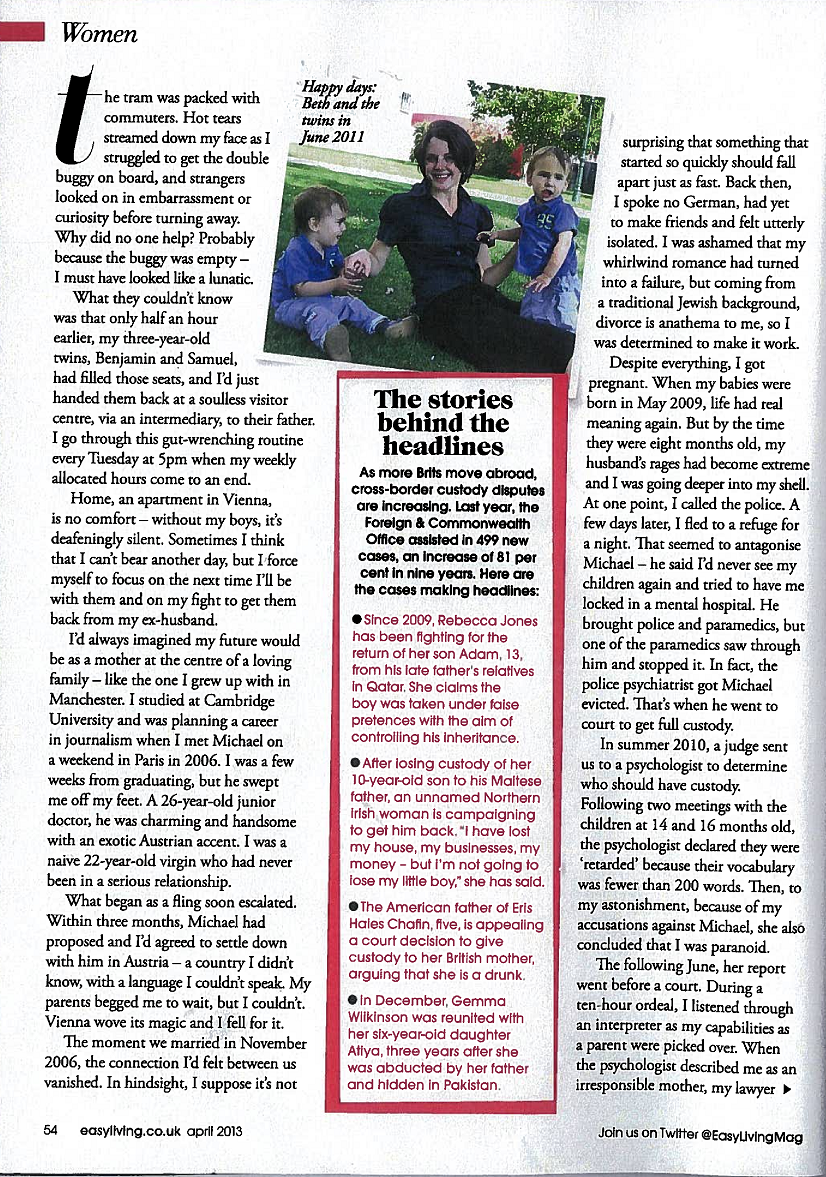 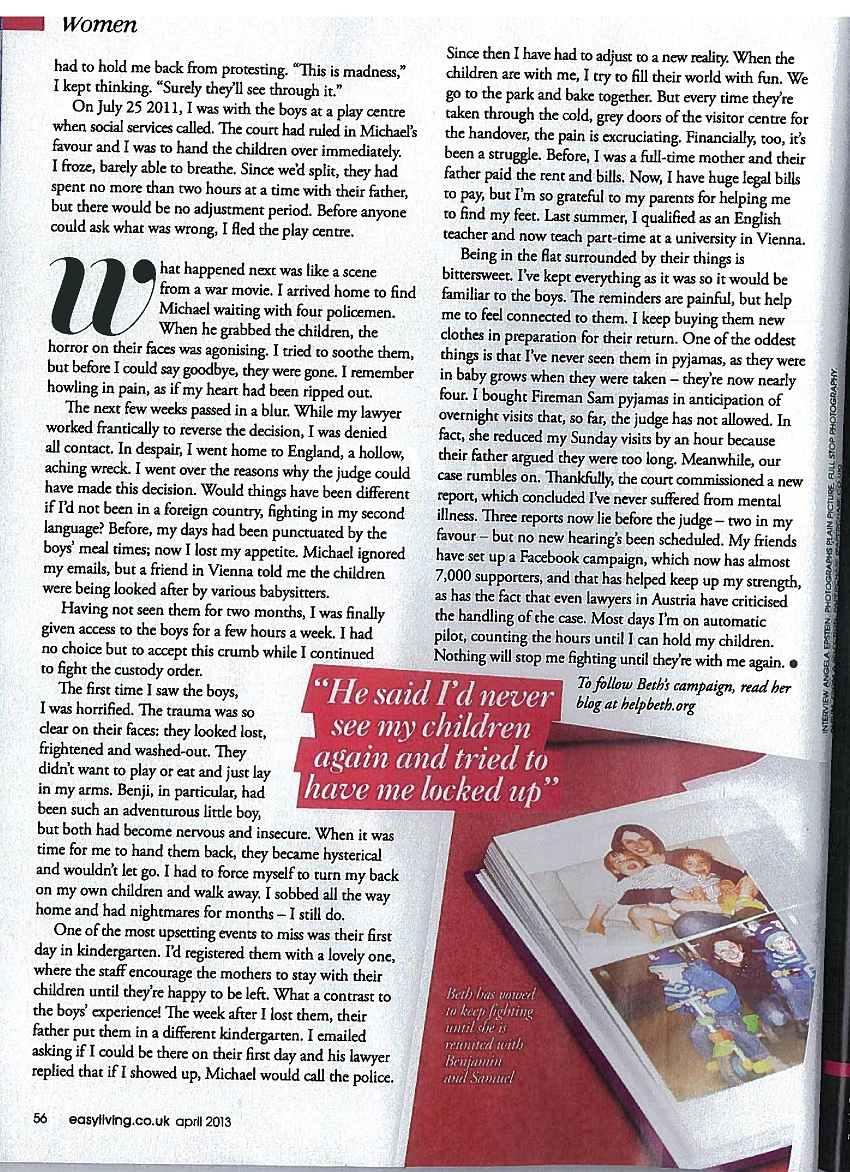 Statistics and studies by a wide variety of organizations, Amnesty International and Save the Children included, demonstrate that family courts around the world are awarding custody of minor children to a parent who is physically or sexually abusing said child, at a the alarming rate of 70-90%, states Quenby Wilcox, Founder of Safe Child International, (see Family Courts in Crisis newsletter –http://worldpulse.com/node/71182,) as well as Founder of Global Expats, an organization whose mission is to assist expatriated families around the world.

In order to justify and rationalize said custodial decisions (cases in which violations of rights of women and children are rampant and totally lacking due process) courts are often labeling the protective parent as “unfit,” or “unstable.” These claims, when investigated, are always nothing more than unsubstantiated allegations by the abusive partner. The only “collaboration” of these claims are made by unqualified, gender-bias court psychologist who have failed to follow protocol, have based their opinion on “debunk” science, or professional negligence (See Save the Children Spain report La justicia española frente al abuso sexual infantil en el entorno familiar, covered in November edition of Family Courts in Crisis.)

The case of Ms. Schlesinger and her children in the Vienna courts follow the same patterns and failures of due process that are being seen in family courts all over Europe and North America. The violation of rights in these cases is rampant and overt, and begs the question of why the British Consulate in Vienna has not used its prerogative and authority as provided for in the Convention of Consular Relations to assure that Ms. Schlesinger and her children’s rights are protected and defended in Austrian courts. The British government has a clear responsibility to assure the protection of these rights under international law, particularly in respect to minor children, victims of abuse, reminding that both the UK and Austria are signatory to the Convention on the Rights of the Child and Convention on Elimination of Discrimination Against Women.

Domestic violence and women’s rights organization in North America and Europe for several decades have substantiated the rampant gender-bias within family courts, which is resulting in hundreds of thousands of children each year being handed over to their abusers. But, governments are consistently refusing to investigate the problems within judicial systems, and even less develop solutions.

One of the main problems within the courts is that lawyers are failing to utilize newly passed legislation and case law to defend the rights of victims, and/or involved in covering-up evidence of abuse of their clients. Studies demonstrate and document systematic cover-up of evidence of abuse by lawyers and judges for a variety of reasons, including gender-bias and discrimination against women; widespread “training” within the court systems of “false allegations” theory, Parental Alienation Syndrome (PAS) (as an explanation for the rejection of abused children towards abusive parent), etc.; corruption, bribes and pay-offs; and professional incompetence and negligence.

The cover-up for rampant negligence and corruption in the family courts even extends to government regulatory agencies who refuse to investigate allegations of corruption and/or negligence. A recent decision of the Bar Association of Madrid (Preliminar 859/13 posted on http://worldpulse.com/node/73713) demonstrates and documents the refusal to investigate, contending that:

Until, and unless, legal professions and bar associations address the 75+% negligence rates of lawyers, holding these professionals responsible for their negligence (in criminal and civil court,) victims of domestic abuse will continue to be re-victimized by the very judicial systems which have an obligation to protect and assist them.

It is high time that governments start fulfilling their obligations to citizens, particularly women and children. They must stop making empty promises in speeches, and passage of laws and treaties, but then continue “business as usual” in their failure to act and take “positive action” in fulfilling those promises. It is also high time that the international community, with human rights and women’s rights organizations taking the lead, hold governments accountable for the rampant human rights violations occurring in their borders, and the systematic cover-up by family courts of these violations.

I hope that human and women’s rights organisations, as well as journalists, in the UK and Austria will take an active interest in Ms. Schlesinger’s case, thoroughly investigating the facts, and assuring that the rights of these two children have, and will be, protected to the highest letter of the law. The global community has the power and authority to turn decades of empty government rhetoric into reality, and must use it to assure that they fulfill their obligation to all citizens, everywhere.