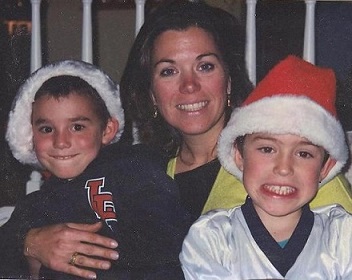 About a decade ago I was surreptitiously thrown into the ‘Wonderland of Alice’ – more commonly referred to as family courts. Since then, (like millions of other women in my position) I have been fighting the system ‘tooth and nail’ in attempts to defend my rights – defend them from violations by Spanish lawyers, judges, court-psychologists, and local law-enforcement.

But, perhaps the most insidious of all, in my battles over the years, has been the US State Department and American Embassy in Madrid’s attitude and total disregard and apathy for the repeated human rights violations of an American woman and her children.

While my complaints to the Defensor del Pueblo & Consejo General del Poder Judicial, Institute of Women, UN Commission on the Status of Women, Colegio de Abogados de Madrid (Bar Association), Appeal to the Decision of the Colegio de Abogados, letter to Under Secretary Kennedy, US Department of State, and letters to the American Embassy in Madrid & US Department of State  (2007-2014) enumerate and document the rampant violation of my rights, it is not necessary to read through all the thousands of pages of documentation and legal argumentation to understand a rather simple situation.

My ex-husband never wanted me working outside of the home (as men in ‘male-dominated’, ‘oppressive of women’ societies have been doing for thousands of years), and in 2006-07 when I started a new company/website, he did everything in his power to prevent me from doing so (see my story). When I refused to succumb to his threats and intimidation, he utilized the elevated corruption and discrimination against women in the courts to defraud me of all of my assets and silence my official complaints against his abuse and threats. If it was not for the Internet, and me exercising my right to freedom of speech, he would have been successful – just like millions of abusers around the world are doing every day.

At present, I have finished “exhausting all domestic remedies,” with my case ready for submission to international courts, with my case ‘parked’ in the pro bono departments of Baltasar Garzon’s law firm ILOCAD, former Senator J. Bennett Johnston’s law firm Steptoe & Johnson and Squire Patton Boggs. While the Spanish judicial system has been the ‘principle’ the violation of my rights and efforts to ‘silence my dissention’, the American government (and the legal profession) has been complicit to this ‘silencing’, and ‘accessory after the fact’ to the crimes involved, by their refusal to act. See a summary of the violation of rights in my case below as well as a detailed break-down in the link below.

Table 1 & 2 – Violations of Rights & Infractions of Law in Gonzalez de Alcala vs. Wilcox 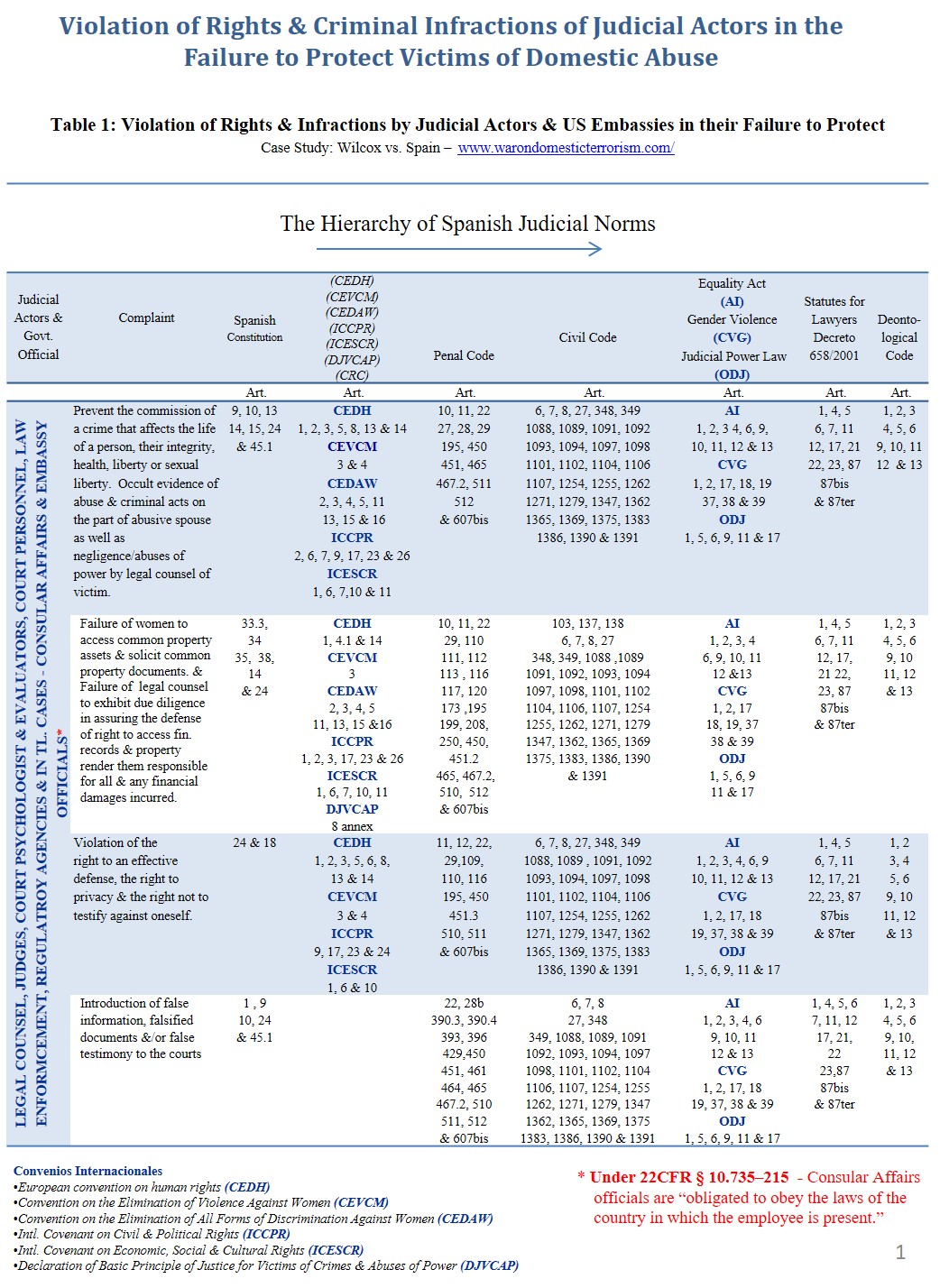 I have a case which challenges the defense of the Spanish government (“inadmissibility due to judicial error and a failure to exhaust”), in the 2nd jurisprudence on violence against women (VAW) as human rights violations, Gonzalez Carreno vs. Spain, CEDAW, 2014; but cannot find anyone with the balls to submit the paper work to the courts.

If the American Embassy in Madrid had fulfilled their obligation to protect and defend the rights and interests of Americans living abroad from the beginning, then Spanish judicial actors would not have dared to so overtly and blatantly violate my rights in the first place. (Under legal statutes and principles, the omission to act and/or prevent a crime by an authority who has a legal obligation to ‘assist’ and/or ‘protect’ renders that person or persons accessory after the fact and complicit to the original crime.)

Perhaps the most incredible part of my story with the American Embassy in Madrid is that while they have continually contended that they cannot “intervene in Spanish judicial procedures” – something I never requested in the first place, they did just that  in 2007 in a case involving US military personnel, see Wikipedia – US soldiers kill Spanish journalist Jose Couso.

The hypocrisy of their actions/inactions and rhetoric is a true affront to the principles of democracy. The intervention and influencing of a Spanish judge by the American Ambassador/US government in Spanish judicial proceeding (See Democracy Now! Interview) is a clear affront to ‘judicial independence’ – but ‘par for the course’ of the political mind-set of Washington, DC.

On the other hand, the State Department’s contention that ‘assuring, in accordance with the law, that the rights of an American woman and her children are respected and protected on foreign soil’ is a violation of ‘judicial independence’ is incredible, and demonstrates to what extent the US State Department lacks a cognitive understanding of basic legal principles.  The Convention of Consular Relations and decision of the International Court of Justice in Avena, Mexico vs. USA (and art. 10 of the Spanish Constitution), inter alia clearly provide the American Embassy with the authority and power to assure that Spanish authorities investigate my allegations and facts of my case – but officials involved simply do not wish to be bothered.

The violation of the rights of some woman that has no money or power, and that no one cares about is simply not on the ‘agenda’ of the US government. – This is the crux of the problem, and why I will continue to stand-up to and denounce the bullying by these ‘important’ people to the very end – refusing to succumb to the many pressure I have received to remain silent, and comply with politically correct activism, which propagates rhetoric, but which allows abusers of power to go unchallenged and unpunished.

“Real courage is when you know you’re licked before you begin, but you begin anyway and see it through no matter what.”

“The one thing that doesn’t abide by majority rule is a person’s conscience.”

IT IS TIME FOR THE US DEPARTMENT OF STATE

TO TRANSFORM RHETORIC TO REALITY!

AND, SINCE NOBODY CARES ABOUT THE RIGHTS OF A WOMEN WITHIN THE HOME AND FAMILY — HERE IS HER REALITY

See more videos of Maria Jose… Noting that her case is not ‘isolated’, but representative of what happens to the wives of abusers who take advantage of negligence and corruption in the courts to continue harassing their victims